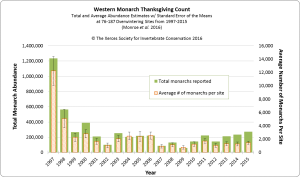 There is still a lot of work to be done to rebuild habitat for monarchs and to conserve space for their breeding, migrating and overwintering habitats. So plan to do your part; plant some extra milkweed plants this spring!

There is a bill before the Wisconsin Assembly which has the potential to affect the groundwater in the Central Sands of Wisconsin. As I understand Assembly Bill 874, approval will further erode the DNR’s ability to monitor pumping of groundwater from deep water wells. This leads to a potential to over-pump which could affect not only the lakes, streams and drinking water wells, but also the native landscaping in the area. The Central Sands area has many unique landscaping features from the pine and oak barrens to rare wetland communities to species endemic to Wisconsin. Although I love the desert (John and I spent nearly seven years of our early married life in southern New Mexico. One of the things I missed most was the green lushness of Wisconsin forests and farmlands.), I’m not sure Wisconsin needs a desert like they have in the Southwest. Unfortunately because of human nature, this bill may have the potential to take us there.

Find out more about the Central Sands area of Wisconsin hydrology.

Find out more about this Assembly Bill 874. The vote in the Assembly is tomorrow, Thursday, February 18th.

Contact your legislators and let them know what you think.

This is old news, but I wanted to share this because it makes me so hopeful for the future. On May 19, 2015, the White House issued the National Strategy to Promote the Health of Honey Bees and Other Pollinators. Preserving, restoring and establishing native plant communities is the most effective way to preserve habitat for native pollinators – bees, butterflies (including monarchs), ants and bats. I see this strategy as a step in the right direction toward better native habitat development, management and protection. It should also give us a more comprehensive pesticide regulation. Native pollinators are an essential part of a healthy environment and our very livelihood, and this White House action makes their protection a national initiative. In the days to come, I’ll be posting about more actions as a result of this new strategy. Read more about the Pollinator Health Task Force.