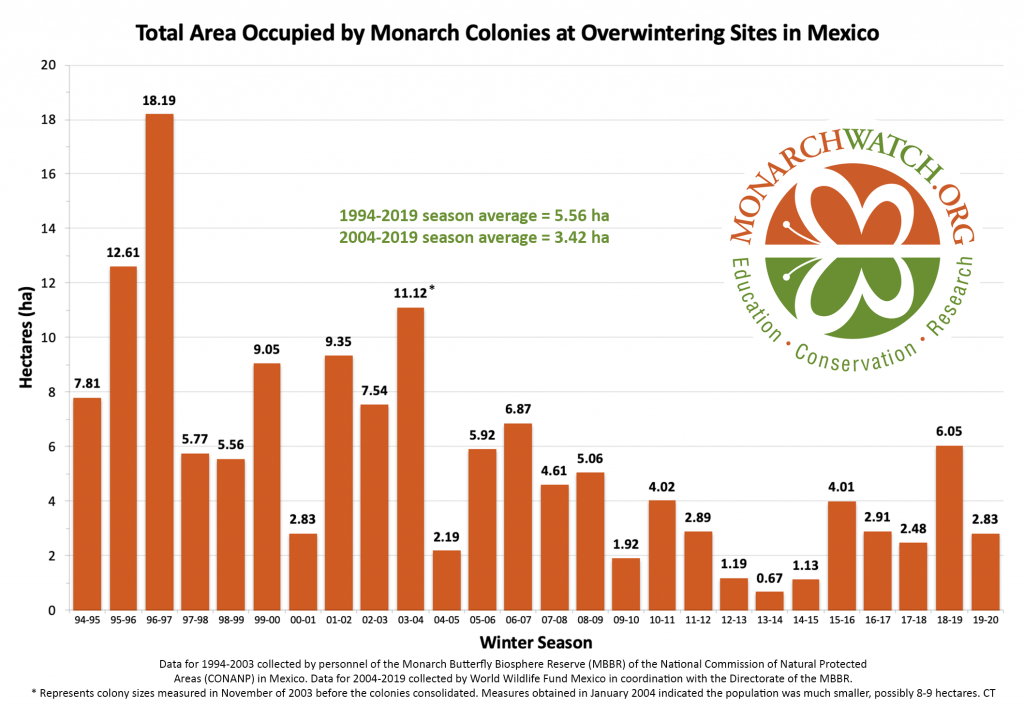 Something unbelievable has happened to the Monarch population. Due to the cold spring in the upper Midwest and the dry fall in the southwestern states, the Monarchs’ status dropped to below the 2016-2017 levels.

The monarch migration is comprised of three or four generations. In other words, the individual butterfly moving through Wisconsin in the fall was the grandchild or great grandchild of the adult that left the wintering areas in Mexico in the spring. According to Chip Taylor Jr, “growth rates of populations decrease as age to first reproduction increases. Because most first-generation monarchs migrate north in May and early June, the conditions during that time are critical. In 2019, those conditions — mostly lower temperature — delayed the  recolonization of the summer breeding area north of 40°N. Delayed arrivals can ripple through the rest of the breeding season, resulting in a later migration,” coupled with the drought in Texas.

What can you do to help?

Reference The Amazing Monarch Migration. Monarchs need milkweed for the spring, and during the summer and fall migration, the adults need nectar. They use asters, meadow blazingstar, coneflowers, black-eyed Susans, beebalm and other native flowers (as well as some non-native ones).  The efforts to create, maintain, enhance and protect habitat for monarchs and pollinators can make a difference. Creating and maintaining habitat,  educating others, contributing data to citizen science programs and advocating for the protection of wild spaces are things we all can do.

The senseless killing of the environmentalist Homero Gómez González and tour guide Raúl Hernández Romero, two of the activists naturalists who worked at Mexico’s El Rosario monarch butterfly sanctuary, leave much to be concerned about. Although the Mexico government wishes to promote ecotourism and the largest and most visited sanctuary is the Monarch Butterfly Biosphere Reserve — despite the  biosphere reserves designation — the illegal logging continues. Though conservationists persist in trying to stop the logging, if it is not kept in check or stopped, the monarch butterfly and the forests will cease to exist.