My most recent wildflower adventure took me to our hunting property for the first time this year. Between the rains which sometimes make the lane in impassable; the horrible storms which have caused so much damage in my own landscape; and my volunteer commitments, there just wasn’t an appropriate time for me to get out there until now.

But the rains had subsided for awhile and my brothers and a nephew cleared away the fall-downs at the hunting property, so a time presented itself.

Oh, what a wonderful feeling to be back at this very special place. Our hunting property is not the hardwoods you see with White Trilliums and Solomon Seals. It’s primarily a cedar swamp with lots of ledge rock which means it has very different, very special species of plants. Lichens, for example.

The Eastern Candlewax Lichen (Ahtiana aurescens) grows throughout Northeastern USA, and “is most commonly found on cedars and pines, and rarely on hardwoods. It is pale gray-green on top, in overlapping lobes whose shape is somewhat similar to oak leaves. The underside is pale brown, and shiny. The apothecia—small goblet-shaped fruiting bodies—are brown in color and less than ¼” (7 mm) in diameter.” (FloraFinder)

I found this image and general overview on the WDNR (Wisconsin Department of Natural Resources) webpage. I thought it might be of interest to others also. 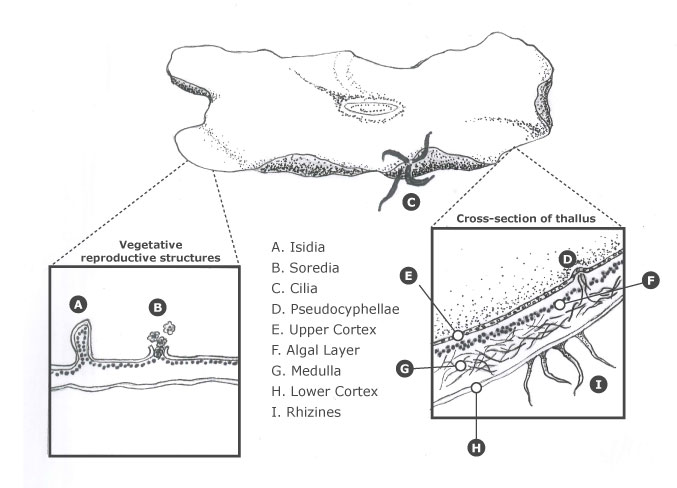 Lichens represent a unique symbiotic relationship between two or sometimes three organisms: a fungus; an alga; and/or a cyanobacterium. This figure provides a good overview of a generalized lichen. The main body of the lichen is called the thallus. The thallus is the vegetative part of the lichen (i.e., not including any reproductive structures like apothecia) and is often what we visually associate with a lichen. The figure above depicts a foliose thallus with the upper surface curled up in places to reveal the lower thallus surface. The magnified thallus cross section on the right shows a number of additional layers. In this example, the top layer is the upper cortex, which is made up of fungal filaments. Underneath that is the photobiont, either an alga or a cyanobacterium or both. Beneath the photobiont is a loose layer of fungal strands (hyphae) called the medulla, and below the medulla is the lower cortex.

Lichens can reproduce sexually via spores, which are associated with the fungal component of the lichen. However, these spores must again find an appropriate photobiont before a new lichen is formed. Lichens can also reproduce asexually. The two structures shown in the box on the left function in asexual reproduction. Both isidia and soredia are essentially photobionts wrapped in a fungal skin. These can be released from the thallus to form new lichens. (WDNR)

See the Glossary of Common Lichen Terms for descriptions of more lichen-related terms and photos that depict these features.