Because reducing the allowable levels of Atrazine is such an important event to me, I asked Maryann Whitman, recently retired Wild Ones Journal Editor, to prepare one of her scientific summaries for me to share with you.  Here is what Maryann had to say about Atrazine:

Banning Atrazine (one of the Triazine group of chemicals), or even just reducing its use is a very complicated matter. The Triazines are used in Breast Cancer therapy—so the potency of the base molecules has been recognized. In this “Refined Ecological Risk Assessment for Atrazine” the EPA mentions that the atrazine molecule is able to access the ground waters of the areas where it is applied. That this means Atrazine is in the drinking waters of thousands of geographic areas across the country is not pursued. They only use application levels as the defining point.

To make this a more effective assessment, it would be appropriate to include information on the dose of application; timing of application/dose application at any given time; peak application dose; persistence of availability over a given time frame; persistence of availability beyond the expected time frame and more. Unfortunately none of these data were collected over the past 20 years. Science has discovered so much about the detrimental effects of the use of Atrazine, but this Ecological Risk Assessment only skims the surface of effective regulation of its use. This is a serious matter!

Possibly in an effort to make up for not having collected data on the availability and effects of Atrazine in drinking water, on September 20, 2016, the EPA announced “Awards of $4.8 million to Six Universities to Research Water Quality Benefits. This funding is intended to be used by the universities to work with local communities to better understand the economic value of water quality.”

It is a chemical that does not occur naturally; it is created in a lab. Chemically it is a Triazene in that it has 3 carbons, 3 hydrogens, and 3 nitrogen atoms connected in some configuration.

It was created and released in 1958 for use as an herbicide on weeds in farm fields, with the intention of increasing the yield of the crop to be grown in the field. It is an herbicide that works by disrupting photosynthesis in most of both broad-leafed and grass-leafed weeds. It is available and used world-wide.

Its chemistry is such that it doesn’t readily bind to or react with many soils. Interaction is influenced by soil moisture and pH. Reports of the half-life of Atrazine in the soil range from 14 to 660 days.

It is however, very soluble in water and persists in water for a very long time. (Three years after use of Atrazine was banned in Italy, traces were still seen in the urine samples of pregnant women.)

Atrazine is applied to crop fields early in the spring to kill existing weeds which, if left growing, will (the reasoning goes), compete with the crop for resources and potentially lower the yield. In this application, Atrazine’s ready solubility in water is a useful trait, as it must enter the weeds through their roots.

Another result of Atrazine’s ready solubility and movement in water means that spring rains wash huge loads of Atrazine into our drainage ditches and streams—our surface waters, and it then infiltrates into our ground waters and our drinking water. In areas globally where Atrazine use is permitted, traces of it can be tracked in the waters throughout the year.

Therein lies the public’s problem with Atrazine. It has become the most commonly detected pesticide in the “waters of the United States” (a phrase mentioned in our Clean Water Act.) 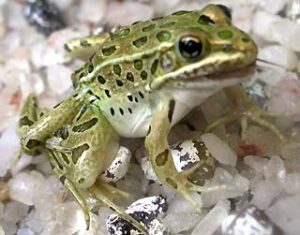 This is the scenario that was first seen in amphibians—frogs and other creatures dwelling in surface waters:  gonads missing in male frogs; extra legs growing out of unexpected parts of the skeletal system.

Listed here are the most disturbing results involving human beings—results of studies not done by the EPA nor Syngenta, the manufacturer of Atrazine.

For a very even-handed read, look up The Natural Resources Defense Council’s the 2009 statement on “How the EPA is Ignoring Atrazine Contamination in Surface and Drinking Water in the Central United States. Their 2010 version is a milder repeat that says “You didn’t listen the first time.” The first is titled “Poisoning the Well” (what more can one say?) The 2010 version is titled “Still poisoning the well.”

The abstract for the Ecological risk Assessment for Atrazine prepared by the EPA is found on page 2 and again on page of this pdf document. Note:  3.4 ug/L (micrograms per litre) equals 3.4 ppb (parts per billion). It clearly states that our landscape across the country is at risk not only from the area of application, but also from “off-field” exposures from runoff and spray drift. We already know this from the disappearing hedgerows from around the countryside.

Send your comments re the ecological risk assessment on the use of Atrazine to the EPA on or before October 5th.