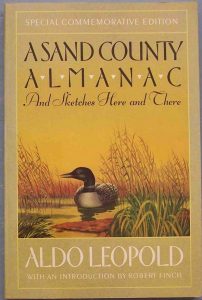 Quoting Buddy Huffaker, Executive Director of the Aldo Leopold Foundation, from a 2014 WPR broadcast on Central Time: “It’s not because he has the answers for us, but that he provokes us to think about the fundamental questions about what our relationship with the natural world is ….We continue to deal with these real challenges…what Leopold called the oldest task in human history: How to live on a piece of land without spoiling it.”

For details about Aldo Leopold events in your area.  If you aren’t able to participate, pull out your copy of A Sand County Almanac and read all or a portion of it. The opening paragraph where Leopold writes about killing the old wolf and reaching her just in time to watch “that fierce green fire dying in her eyes” is my favorite. It is so unfortunate that more people today don’t realize what he did at that moment: “I realized then and have known ever since — that there was something new to me in those eyes — something known only to her and the mountain.”

The wolf has become the symbol of a healthy environment, but still today people don’t understand their importance in the circle of life. Last year Congress introduced S.J. Res 18 giving non-subsistence hunters in Alaska’s national parks the right to hunt wolf pups at their den site and to spot bears and their cubs from helicopters in order to shoot them upon landing. The House passed it on 2-16-17 without amendment and the Senate will vote later this month (S. Res 69). This bill is unethical and immoral, besides advocating poor sportsmanship. What happened to the “Fair Chase”? If you wish to comment, go to congress.gov to contact your legislators. See also Defenders of Wildlife fact sheet.

If you aren’t near a community event for Aldo Leopold Weekend/Week, please take the time to read from A Sand County Almanac. It’ll renew your perspective on natural landscaping and gardening for (wild)life.

Watch a short film on how wolves brought back a healthy landscape to the rivers of Yellowstone, see Wolf Awareness Week.